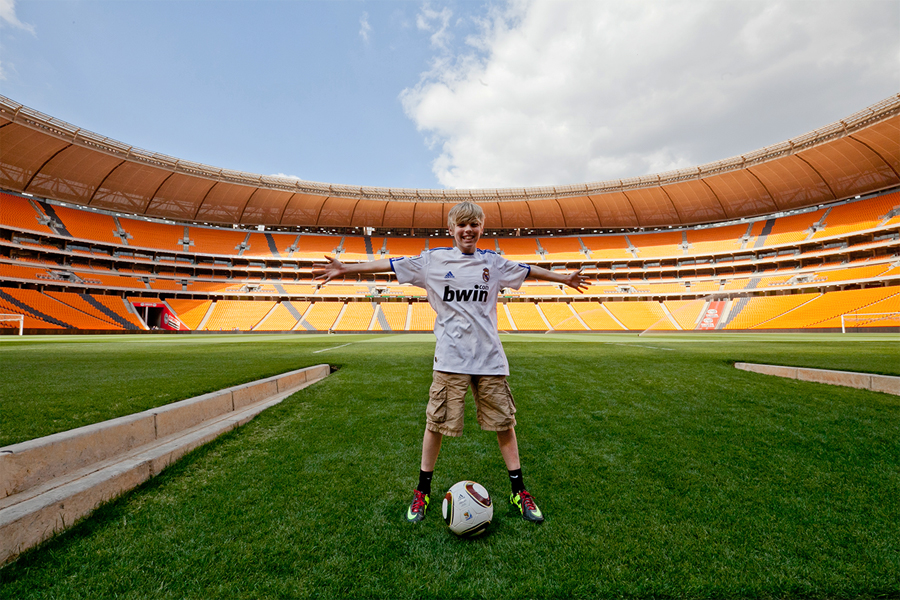 When I was in South Africa a few days back, my family and I got to take a private tour of Soccer City-the stadium where the 2010 FIFA World Cup championship was played. It was sensational! Soccer City is also known as FNB stadium. It has a capacity of around 90,000 +/- and is located in Johannesburg. We got to explore almost everything. We sat in the stands. We walked down the same tunnel the players walk down. We kicked the ball around in the warm-up room. We even got juggle and dribble on the side of the pitch a bit. I loved it. Someday I hope to play there professionally. -Ethan King

This is Joseph. His lives in Kliptown – a shanty-town outside of Johannesburg. When I was in South Africa last week, I saw him pushing an old toy car around through the dirt. Joseph was supposed to be at creche (preschool) but he was feeling sick, so his mother made him stay home. As soon as we saw him, we knew he needed a soccer ball. As we walked over, he stared us down – probably wondering, “who are these guys.” I walked over and handed him a new ball. At first there wasn’t much of an expression. I think he was still wondering what we were up to. Once he dropped the ball to feet and started kicking it around – it seemed like he forgotten about his stomach ache. In matter of time he was all smiles. His mom said that up until this point, he had never owned his own soccer ball. Maybe he might be the next Drogba. Who knows?

This past week the new Charity Ball Kits arrived. They look spectacular! Tonight at training, I was able to hand them out to the guys on my Lakeshore Premier Soccer team. Special thanks to Coach Brent for helping organize things. The kits are sponsored in part by Soccerpro.com. Other generous people helped underwrite the tournament fees. The guys on the team were so jazzed to receive the Adidas Tiro 11 gear. The tournament takes place in Novi, Michigan on May 11-13. Our team is playing on behalf of Charity Ball to help spread the word and hopefully get some more people involved in the project. -E

My brother just got the 2012 African Cup of Nations Match Ball (the Comoequa) for his birthday. Adidas doesn’t sell the ball in the US. Ever since we planned our trip to South Africa, my brother has been wanting the ball. The Comoequa is named after the Como River that runs through the co-hosts countries, Equatorial Guinea and Gabon. The Comequa is designed and constructed the same way as the Tango 12, the official match ball for the Euro 2012. I have had the chance to have a kick about with the ball and it is a huge improvement on the 2010 Jabulani WC ball. Congrats again to Zambia on the win. Check out promo video here.

For the past few years, we’ve been supporting the Nike (RED) project by wearing their red laces in our cleats (boots for our Euro/ Africa friends). 2 weeks ago we stopped by Nike’s Training Center in Soweto, South Africa. When we showed up, there was a U17 international tournament going on. We talked to some of the guys from Zambia and they were pretty jazzed about playing. After watching a game we went inside the center and took a little tour. At the back of the building was this cool life-size sign that said, “Lace Up. Save Lives.” We quickly snapped a pict. Whenever you buy the Product (RED) laces for around $4, Nike will give 100% of the profits to Fight AIDS and fund programs that provide medicine for those living with HIV in Africa. They look sweet and they make a difference. Grab a pair here.

After supper tonight, Jade (my brother) and I went out to garage and loaded up a few suitcases of soccer balls to take with us on our trip to Africa. We’re leaving in a couple days and will be spending most of our time in South Africa around Johannesburg. Special thanks to Bounce Athletics for helping out with some of the balls this round.

I am excited about the new Mercurial Vapor 8s. I currently wear the purple Vapor 7s with the glo-green lightening bolt. I’ve used them for about year now.The Vapors are light on my feet and allow me to be quick on the ball. The new 8s have been redesigned from the ground up.The first color way is orange-mango with a black Nike swoosh. People say the color is similar to the orange Nike shoeboxes. Thinking about picking a pair of these up. Looking forward to seeing what Nike does with some of the other color ways. Sweet boots Nike!

If you’re looking for an awesome soccer camp to attend this summer, be sure to check out Hope College’s summer camp in Holland, Michigan. I’ve been attending the camp for 4 years now. Last year I worked with the players as a jr. coach. Coach Steve Smith is awesome! There are day-camps and week-long residential camps where the kids can stay in the dorms. Hope to see you at Hope College Soccer Camp this summer. Camp info.

This past weekend our Lakeshore U14 team played in a tournament at Grand Valley State University (west Michigan). We won 2 and lost 1 to FC London, Canada.

Our team has been working together and training over the past couple months getting ready for the spring season and the State Cup. The guys are picking up the pace and our passing is really starting to come together. Coach Brent is doing a sweet job holding us to a high standard of play.

This past week I found myself back in Wixom, MI for a tournament with my club team. Wixom has become a temporary home of sorts for my ODP training. ODP stands for Olympic Development Training. In August I made the state player pool and over the last several months had the privilege to play with Michigan’s top 26 players in my age group. The goal of ODP is to play soccer at a higher level of competition and ultimately make it to regional competition. Any of the 26 players can be called up and compete for the state at regional camp.

Charity Ball is a soccer charity that provides new, quality soccer balls to kids in poverty-stricken communities around the world.

© 2020 Charity Ball. All Rights Reserved. Charity Ball is a 501(c)(3) organization based in the United States. Privacy Policy